EARTH DAY serves to remind us just how incredible and unique our home planet is. From her atmosphere to her rivers, Earth has everything we need to survive.

If we want to make sure future generations can thrive in Earth’s beauty, we must actively protect natural resources, care for other species and always choose to invest in learning more. Frankly, Earth doesn’t need us, but we need Earth, so let’s show her our love (and not just on Earth Day)!

Below: My expressions through 10 Earth haiku poems and photos of places that have left me in awe

Earth, I love you so

Red rock above all

She lives in balance

Vast lands were once lush

Now troubled and in danger

Pillows in the sky

Bringing water to the ground

Twisted at their base

through their webs of rooted life

Even the strong and mighty

A strength to reflect

A place we call home

Free for us to be living 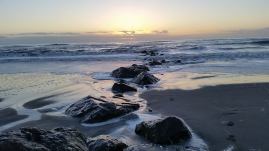 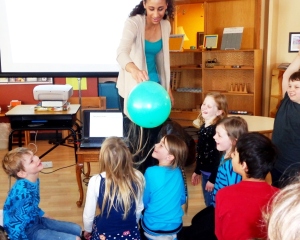 Science is meant to be interactive!  That’s exactly why I tried out these three weather experiments with a class of first to fifth graders after teaching them more about severe weather events and safety.  These intelligent and curious students were very engaged and I loved hearing their thoughts on each experiment. (I’ve included some suggestions on what I would change or add to the experiments for the next time!)

What it shows:  The water is a fluid, as is air in the atmosphere.   Due to convection, the warm red water representing the warm, unstable air rises, while the cold blue water representing the cold air mass sinks.  The cold air brought in by a cold front forces the warm air to rise.  When the colors mix to create purple, you see a thunderstorm cumulonimbus cloud form with a somewhat-overshooting top.

**This demonstration did not work the best for me because the water was too warm and the ice cubes began melting and spreading throughout the container.  Make sure to add just one ice cube at first, and to use lukewarm water.  I also used two separate containers so the kids wouldn’t have to all crowd around one! 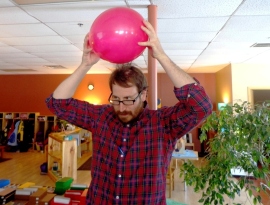 The kids (and teacher-at right) loved this one, and it’s SO simple!  All you need to do is blow up and tie as many balloons as you can.  BE WARNED: It’s helpful to show a quick demo before throwing the balloons out to the crowd of excited kids!

Ask for a volunteer.  Rub the balloon on his or her hair to observe how the hair stands up and attaches to the balloon when you move it slightly away from their head.

What it shows:  When you rub a balloon on the hair, you are putting tiny negative charges all over it.  Because these charges are all the same, the strands of hair attempt to move away from one another rather than join together.  If you move the same balloon (after having been rubbed on hair) near the ceiling, you will see that it becomes attracted to the ceiling and actually sticks to it.  This is because the balloon and the ceiling have opposite charges.  Lightning acts in a similar way, where it is attracted to the ground due to opposite charge.  This is because of static electricity! In dry air, we notice greater effects of static electricity because there are less water particles in the air to help electrons move off of us…so a bigger charge is built up! 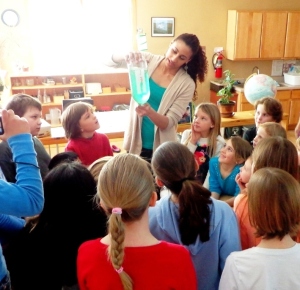 Fill the bottle a little over three-fourths full of water and add in just a couple drops of dishwashing liquid.  The ratio of dishwashing liquid to water  took some experimenting before I went in to the school, so I would suggest testing it out before demonstrating.  I added in confetti pieces to make it a bit more exciting! Glitter, food coloring (only need a couple drops so it’s not too dark to see through), or colored lamp oil (would make the vortex stand out more) are other fun extras you can try adding to your bottle.  Swirl the bottle upside-down bottle in a fast, circular motion so that its contents spin into a vortex.  Keep in mind that tornadoes almost always rotate counterclockwise (cyclonic rotation) in the Northern Hemisphere.

What it shows: Like in an actual tornado, a vortex forms (lucky for us, it’s in a bottle!).  Centripetal force, which directs the water inward toward its circular path, allows the water to spin quickly around the center of the vortex. Wind shear plays a major role in the formation of tornadoes.  The person swirling the bottle is actually the force causing the water (wind) to rotate and create a vortex.  You can even mention the three ingredients needed for a tornado to form: moisture, lift, and, instability!

**I used two separate bottles so all the kids could have a turn.  The sunlight from the window really helped to show the vortex more clearly! You could connect the bottles mouth-to-mouth with duct tape (very tightly wrapped) to see the vortex transfer from one to another, but I’ve seen these make a big mess unless you use a Tornado Tube bottle connector

I had the exciting opportunity to talk about severe weather and safety with a class of young scientists!  These elementary-age students were very eager to hear all about hail, floods, winter weather, but especially tornadoes, thunderstorms, tsunamis, and hurricanes.  I absolutely loved seeing how tuned in the kids were to the weather facts and safety tips.  At the end, we did three meteorology-related experiments that really helped make everyone excited and involved.  I have some great photos of many of the kids trying out the experiments for themselves after the demos! (I’ll link my next post to this one so I can share the experiments in detail)

I really enjoyed sharing what I’ve learned on a topic I’m not only passionate about, but that we all realize is important to understand so we can best prepare our families for severe weather events.  What a wonderful day spent with bright, inquisitive children full of pure energy!!

Input from the Kids:

When the power goes out, what do you do if you have to go to the bathroom?

My three cousins saw a tornado before.

Can hail kill you?

Why does warm air rise above cold air?

Why is it not safe to play in flood water?  How can it make you sick?

You can fill up a bathtub with water before the power goes out.

Can I take home the tornado pop bottle you brought so I can make a plastic penguin?

Where do you go if there’s a tornado?

Are we gonna make a rainbow?

How do hurricanes form, and how do they get stronger?

Can I take home a balloon?

So if there’s a flood, you do the opposite of what you’d do with a tornado.  You go to high ground instead of low ground!

Will you pleeease come to my birthday party?